Esther The Jewish Orphan Who
Became A Queen.

That storytelling is a central part of human life has always been emphazied here. Children throughout generations listen quietly as they learn of the past through story. And it is pretty much the same everywhere today!

One of the first stories that has greatly influenced me, is from a book many consider to be the oldest in the world. It contains true life stories of various heros and heroines. This book is the Bible and it is possible you already have a copy in your home as it is also, the most widely circulated book on earth.

The Bible is a collection of little books combined to form one big book. It has been used to teach morals to children for centuries and it is still relevant.

So, every now and again stories from that book will be featured here. 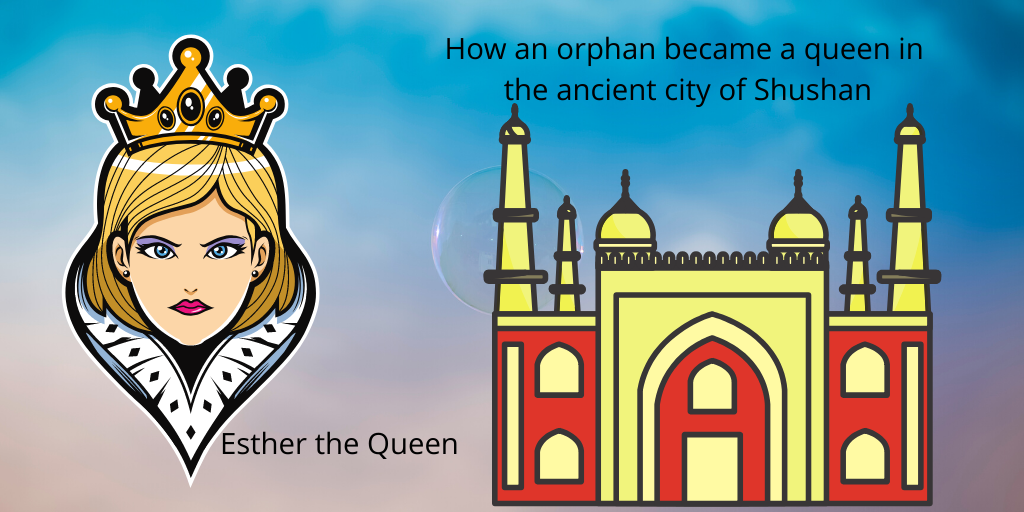 This week, at Storytelling with Ngozi, we have pulled out a story from of the world's oldest book, the Bible. The story of Esther and how she became a Persian Queen.

The story is set in the ancient city of Shushan. At the time, King Ahaseurus was the most powerful ruler. He held a party for the princes, his friends and invited many others. It was a big party that last for days. Everyone was happy as the King asked them to do as they wished.

They all had loads to eat and drink. On the seventh day, the king was so happy with himself and made a special request. To who? What was it? Learn more from the audio recordings below and please come back here to look at the activity for the week.

Lessons From The Story?

Life in those days is so different from now. The rulers had so much power. They may be cruel at times and often punish people for disobeying them.

Vashti was beautiful and disrespected the King. She thus lost the crown to someone else. What would you have done differently if you were Vashti?

We need to respect anyone in authority even when we do not like them. Parents, teachers and anyone you little angels have placed in their care.

Activity For The Week?

Learning about people from the past could be fascinating. Do you know what a palace looked like in Persia? How did the Queens wore? Draw a picture of a Queen, the King and the palace.

Also do you know which country the city of Shushan is located today? Send your anwer and pictures using the box below.

We will enter you for our monthly giveaway, which is a Freddy and the Veggies mug or tshirt whichever you choose.

And don't forget to support our Patreon.

Have A Picture Or Writing?

Do you have a great story about this? Share it!

I help moms turn their ideas into a book. Request a call below:

There is also a Facebook group for moms who want to write.